On November 3, about 50,000 runners (and millions of spectators) will take to the streets for the 2019 TCS New York City Marathon.

Furthermore spoke with eight Equinox runners ahead of race day to learn about the mantras ("pizza"), core exercises (including plank variations), and drama (sprained ankles and bee stings, among others) that got them to the start line. Here are their stories.

Reese started running in 2013, when he and his sister decided to do a half marathon for some sibling bonding. “I love the feeling of getting lost in your thoughts and pushing yourself,” he says. “It’s so thrilling to run through the city and see so many familiar faces on the course. I also love that the finish line is fewer than twenty blocks from my apartment.”

This will be Reese’s third consecutive NYC Marathon. To prepare for the elevation gain on the course, he ran across the Queensboro Bridge and back and forth on the Riverside Park Promenade between West 86th and 92nd streets in New York City.

His pre-race routine: “The day before, I stay off my feet after 3 p.m. and get in bed by 8:30. When I wake up, I have a piece of toast with almond butter and an apple. Once I get to marathon village, I play with the therapy dogs, listen to my pump-up jams, take some BCAAs and Nuun, and try not to drink too much of the free coffee.”

A sprained ankle: The thing that set his training back—but not enough to keep him from running the Chicago Marathon just three weeks before NYC.

His race-day mantra: “You’ve done this before. You will do it again.”

The first thing he’ll do post-race: “Grab my medal, then head to Equinox West 76th Street to shower and get ready to celebrate.”

“In 2016, I couldn’t run more than two miles at a time,” Tarkin says. “I wanted to push myself by training for a half marathon with two of my best friends.” She decided spontaneously to run NYC this year for charity—with only eight weeks to prep. By November 3, she will have logged 166 miles and countless sessions with her Hypervolt.

Her race-day strategy: “Normally on my long runs, I think in three-mile increments rather than all the miles I have ahead. On race day, I’ll do the same. For fuel, I recently switched from energy chews to gels, which I find easier to swallow when I’m running.”

The marathon is a metaphor for life. It’s a practice of being comfortably uncomfortable.

“I started running when a coworker at Equinox convinced me to do a half,” says Beltre, who earned his NYC bib through New York Road Runners’ 9+1 program. When asked about pre-race nerves, he notes that he has none. “It just hit me that my first marathon will be in my hometown and is one of the most amazing races in the world,” he says. “I am excited beyond belief.”

His running superstitions: “My race kit has been planned for weeks. I’ll lay it out the night before and wait to wear race apparel until after I finish.”

8: How many pairs of shoes Beltre, who has a self-described shoe addiction, has been rotating through while training.

“I run as a way to decompress, take a break from technology, and enjoy the beautiful Chicago cityscape and lakefront views,” says Harshbarger. “It’s a great way to clear my head.” On November 3, she’s running to fundraise for the World Wildlife Fund with a team of friends, which includes Michael Wollpert, featured below.

Ab and glute exercises were instrumental in her training this year. Her weekly glute regimen included Best Butt Ever and 3 sets of 12 reps of moves like barbell hip thrusts, single-leg deadlifts, and squats. Forearm planks with reaches (3 sets of 10 reps per arm) and side planks with hip dips (3 sets of 20 reps per side) were ab staples.

Spicy foods: What she’ll cut out of her diet in the days leading up to the race.

15K: The longest course she’s completed prior to NYC. “I never gave a marathon too much thought until some friends encouraged me to go for it.”

Precision Run: The weekly workout she credits with prepping her for NYC’s hills. “Training outdoors in Chicago is relatively flat. Those speed and incline sessions will help my outcome tremendously.”

Use this lineup, comprised of Equinox runners' favorite tracks, to inspire your own race playlist.

“I have been running since seventh grade track and cross country,” says Wollpert, an Ironman and 14-time marathoner who considers himself a cyclist first and foremost. This will be his first NYC Marathon.

Wollpert prioritized recovery this training cycle with regular ice baths, hot baths, compression boot therapy, and stretching. He’s not afraid of potential discomfort. “Our bodies are cyclical, and a lot of times if you wait for the suck to pass, it just might,” he says.

Equinox Hotel: Where he’s staying the night before the race. He's most excited about the Hotel's dark, quiet rooms, its restaurant (Electric Lemon), and the attached Hudson Yards club.

Destination miles: How he broke up the monotony of the Chicago lakefront. “I did several runs in Michigan, Tennessee, Tuscany, Rome, Naples, and Berlin, my favorite. All of these locations offered up incline training and let me experience new routes.”

His most dramatic training run: “On vacation in Tuscany, I had to fit in 15 miles. This beautiful area is very hilly and remote, but there are little two-track bike paths that link all the towns. I headed out with two GUs and no water. I was stung by a bee, chased by very angry geese, and scared to death by a large snake in the grass. Covered in gnats and confused by Italian road signs, I made it to the last mile—which was straight up a very steep hill. When I got to the top, two old Italian men starting cheering me on. I will certainly never forget it.”

"What's the Tee?": The comedy podcast, featuring RuPaul and Michelle Visage, that he'll play when the race gets tough.

“My relationship with running is actually like any other relationship, with highs and lows,” Alexander says. “I do it because I love to move.” Like Reese, he’s doing Chicago and NYC back to back.

“All of my long runs have been solid, and those are the weekly workouts that make me feel confident in my endurance,” he says. On the eve of the race, he’ll carb-load and do a shakeout run with his club, Lean Strong Fast, in Prospect Park. “Then, we’re off to the races.”

On whether he expects race-day nerves: “No. I know that you have to be able to adjust during the race should things not go according to plan—and to be okay with that. Trust your training.”

23: The number of weeks he spent preparing for Chicago and NYC.

You have two choices: one, to recognize that the discomfort is temporary or two, to quit. I refuse to quit.

“I’ve been an athlete my entire life, but I didn’t start running until 1995 when I started working for Equinox,” says Schwarz. “I love the solitude and the fact that you don’t need fancy equipment.” Being such a seasoned runner, she has a simple but deceptively difficult goal: to get a great finish line photo.

To prepare for this year’s event, Schwarz logged weekly Precision Run classes and took regular epsom salt baths. She even racked up miles in an airport car rental lot when her flight was delayed. “I run because I can,” she says. “So often, we take movement for granted.”

Her pre-race rituals: “The day before the race, I salt my food and set a timer to make sure I drink a glass of water every hour.”

19: The number of NYC Marathons she will have run after November 3. “I am a Streaker, which means I've run 15 or more in a row, thereby giving me guaranteed entry for life.”

“I was a track athlete before moving to New York nine years ago, but I focused on sprints and did not enjoy long-distance runs,” says Bloomquist, who has since had a change in heart. “The beauty of marathon training is that at some point, you have to meet yourself in a very uncomfortable place. You have two choices: one, to recognize that the discomfort is temporary or two, to quit. I refuse to quit.”

After entering the lottery three years in a row, he’ll finally run in 2019 with Good Morning America host Amy Robach and a group of their friends. “I am such a better, stronger human because of this city. The marathon is a reminder of all the sacrifice, joy, and love I have for it.”

His X factors: Running up the 1,000-foot incline of Runyon Canyon and getting acupuncture weekly.

His favorite training run: “I ran in the pouring rain in Riverside Park. I may have cried tears of joy and I definitely grew a little closer to mother earth. It was cleansing, literally and figuratively.”

Inside the mind of Deena KastorLife 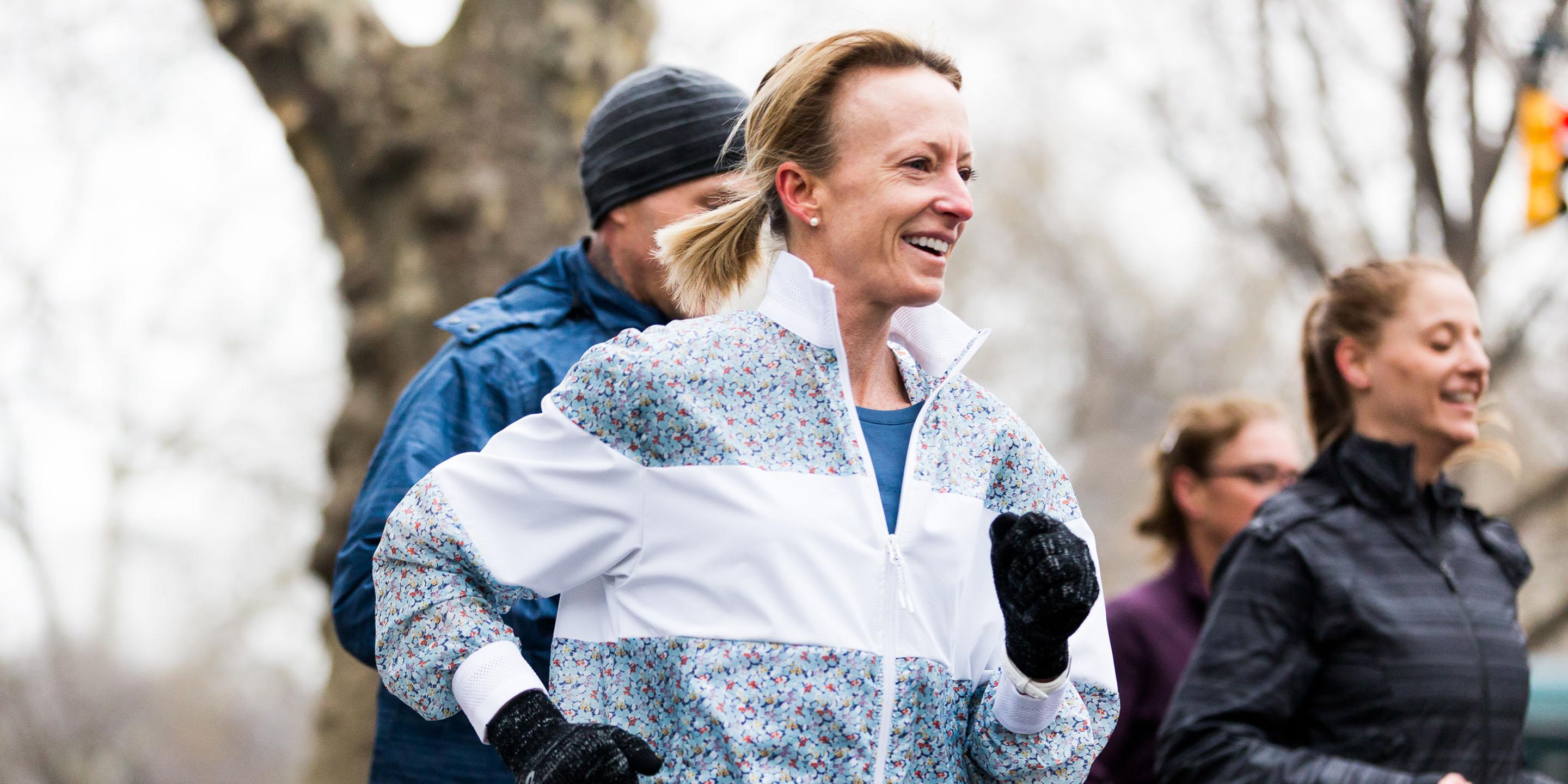