You've never used a rowing machine this way before

The cardio staple can double as a total-body strengthener. Check out this 8-move routine.

Creativity is the unsung hero of fitness. Approaching the equipment you've come to rely upon with a more creative mentality is one way to shock your system (not to mention prevent boredom). “I wanted to use the rowing machine to create an efficient, total-body workout that wasn’t all about cardio,” says Webb Travis, a Tier 3 trainer and group fitness instructor in Scarsdale, New York. So he started to look at the rower a little differently. “It has a chair (or saddle), which glides and helps isolate a lot of core, lower body and upper body muscles, and it’s just as sturdy as a guided motion or cable machine.”

The result of these observations? An unconventional routine made up of kinetic-based exercises that work your whole body (arms, core, hips, glutes and legs), build power and really test your stability.

Perform this workout below as a circuit, completing one move right after the next without rest. Do 3 sets total, with a 500-meter rowing sprint between each.

[*Warning: This workout is challenging, and for your first attempt, you should consult a trainer to help you execute the moves safely, using proper form.]

1. Reverse Crunch with Push-Up
Start in push-up position facing away from the rower, with hands under shoulders, balls of feet on top of the saddle, legs extended, core engaged. Pull knees in toward your chest, sliding saddle forward. Extend legs behind you, pushing saddle back until body is parallel to floor, and perform a push-up, lowering chest to floor and pressing back up. Bring knees back into chest; repeat. Do 12 to 15 reps.
Make it easier: Skip the push-up (slowly slide knees in and out).
Make it harder: Lift one leg off seat, alternating sides with each push-up.

2. Ab Roll
Stand facing the rower with feet about shoulder-width apart. Push the saddle forward as far as possible, and then place your hands on either side, with arms extended in front of you, forming a diagonal line with your body, from shoulders to ankles. Push hips toward ceiling as you slowly pull saddle back toward you, keeping arms straight and abs engaged. When you reach the end, pause for a second, and then reverse motion back to start. Do 12 to 15 reps.
Make it easier: Hold plank on saddle, and try to bring it up and down an inch.
Make it harder: Lift one leg before you roll forward, alternating sides with each rep.

3. Single-Leg Hamstring Curl
Lie face-up on floor, facing the rower, with arms extended out to sides at shoulder level, right knee bent, heel on top of saddle and left leg lifted toward ceiling, directly over hip. Lift hips toward ceiling, forming a diagonal line from right knee to shoulder. Slowly press right foot forward, extending leg, and then reverse motion back to start, pulling foot toward you. Do 12 to 15 reps; switch sides and repeat.
Make it easier: Place both heels on saddle and perform a double leg curl.
Make it harder: Lift arms toward ceiling, keeping shoulders down.

4. Single-Arm Extension/Push-Up
Start in push-up position, facing the rower, with legs extended behind you, palms under shoulders, left hand on top of saddle, abs engaged. Bend right elbow as you slowly press left hand forward, until arm is extended, and perform a push-up. Reverse motion back to start. Do 12 to 15 reps; switch sides and repeat.
Make it easier: Keep arm extended entire time and perform single arm push-ups.
Make it harder: Lift opposite leg (from extending arm).

5. Pistol Squat
Stand facing the rower, with left knee bent, left heel on top of saddle, elbows bent by sides. Squat, bending right knee, pushing hips behind you and keeping chest open, as you press left foot forward, extending left leg in front of you, sinking deeper into the squat, bringing elbows in front of chest. Reverse motion back to start. Do 12 to 15 reps; switch sides and repeat.
Make it easier: Stand beside rower (rather than behind it) and keep leg extended as you squat down and up.
Make it harder: Lift hands overhead.

6. Lat Straight-Arm Plank
Stand facing the rower, about two feet away, with feet more than shoulder-width apart. Hinge forward from hips, keeping back flat, and place forearms on the saddle (body forms an inverted V) with hands clasped together. Use your core to drive elbows and saddle forward, until arms are extended overhead and body is parallel to floor. Keeping abs engaged, use your lats to roll back to start. Do 12 to 15 reps.
Make it easier: Hold modified plank for up to 1 minute.
Make it harder: Lift one leg as you roll out, alternating sides with each rep.

7. Reverse Lunge with Rotation
Stand to left side of rower with right knee bent, ball of right foot on top of saddle and hands in front of chest, elbows bent out to sides. Slide right leg behind you, as you bend left knee (keeping it behind toes) and rotate torso to left. Reverse motion back to start. Do 12 to 15 reps; switch sides and repeat.
Make it easier: Do a lunge without the rotation.
Make it harder: Lift hands overhead.

8. Burpee Side Jump
Stand beside the rower, with feet hip-width apart, arms extended by sides. Bend over and place palms on floor, directly under shoulders. Jump feet back into plank position, and then immediately jump them back toward hands. Stand up and hop over rower, to the other side. Repeat burpee. Do 12 to 15 reps.
Make it easier: Skip the burpee, and perform a squat, followed by a lateral jump.
Make it harder: Add a push-up into your burpee. 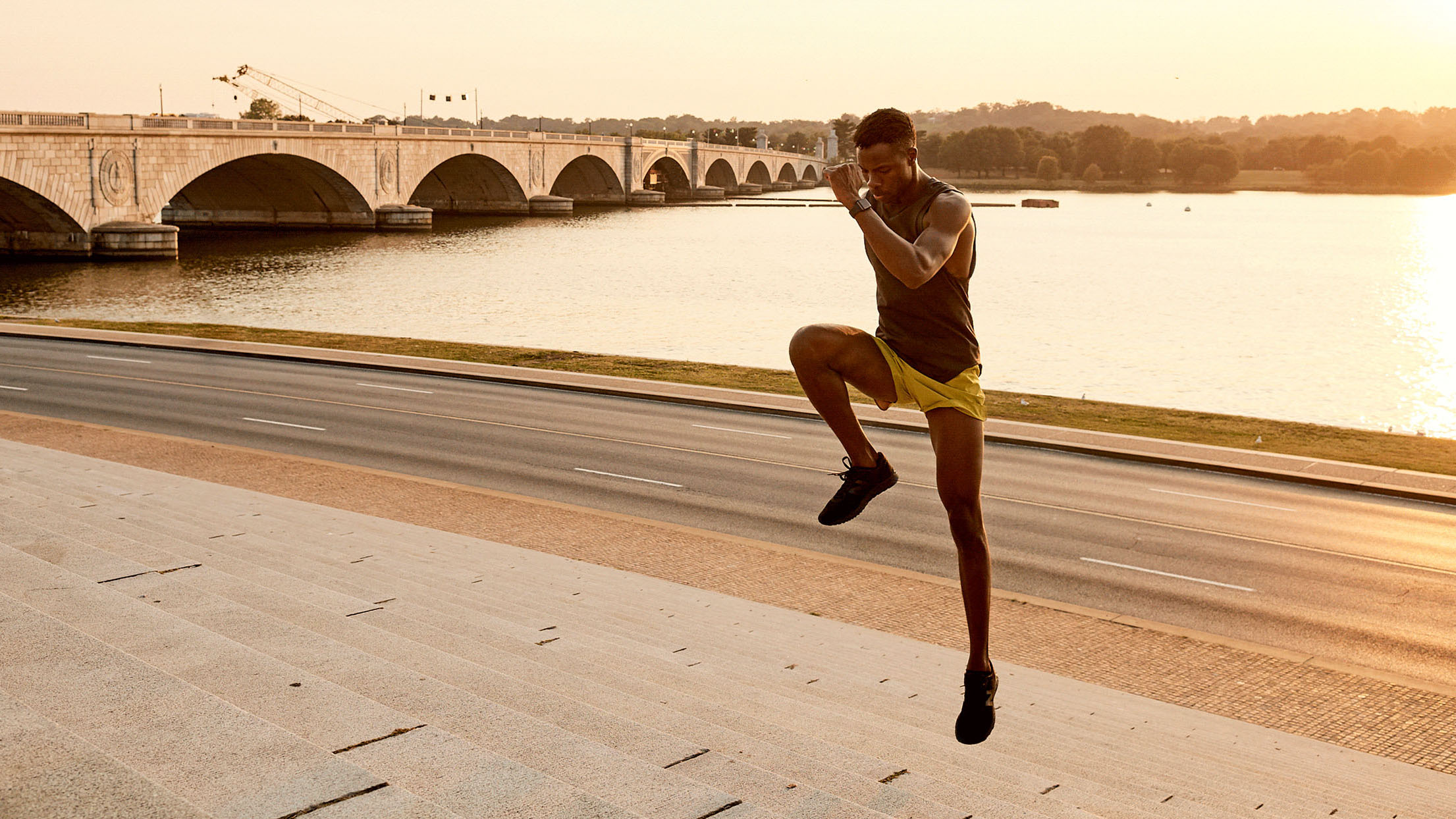 Add this military-grade routine to your regimen. 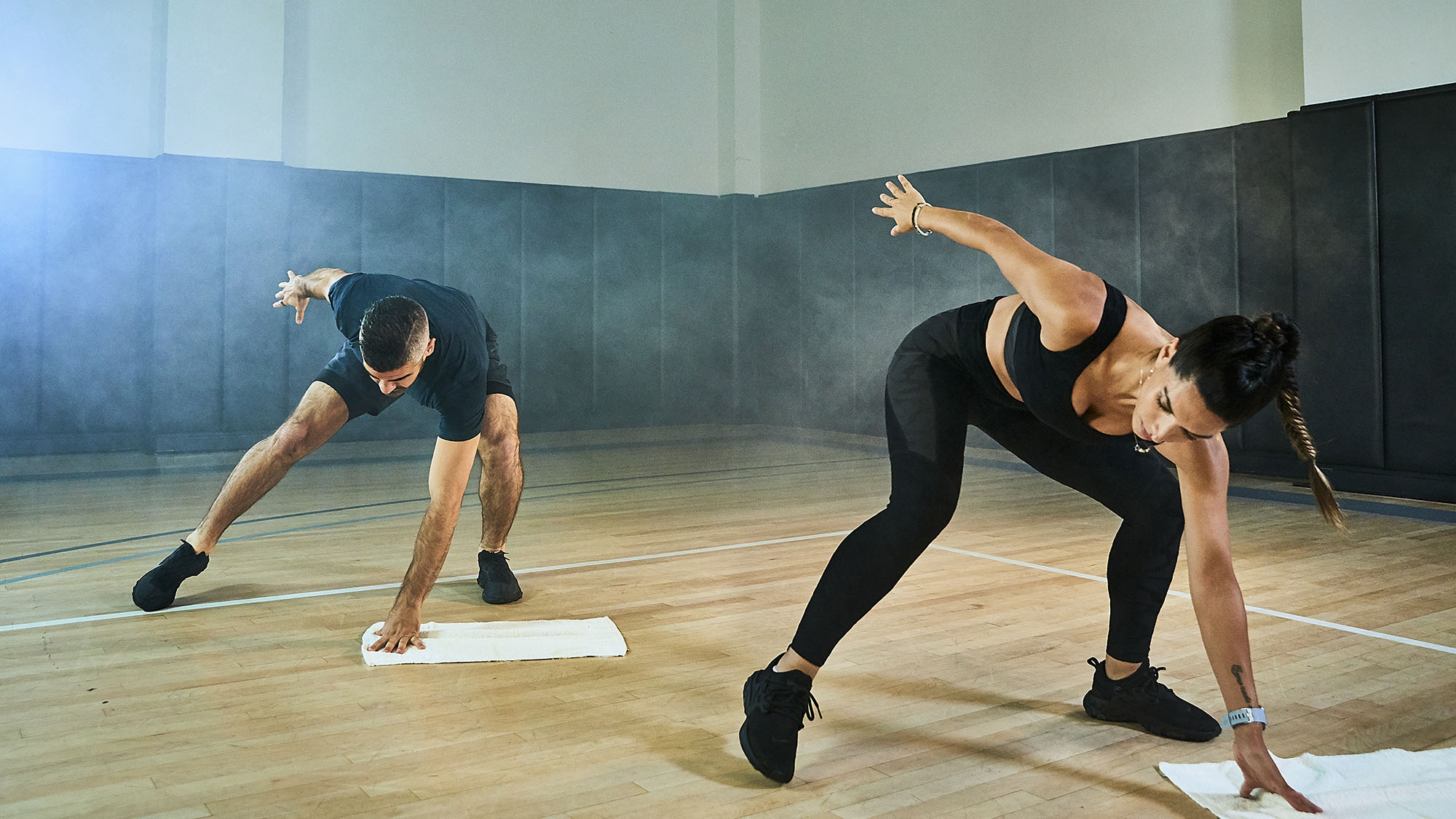