It's a recipe for mobility.

The reason: Muscle tightness is a misnomer. “The muscle is never physically tightened,” says Scott Fournier, Tier 3+ trainer and master instructor at Yorkville in Toronto. “It’s attached to bone, which stays static, but the nervous system will create tension where you’re weak to protect you from injury.” The result is limited strength and range of motion.

The fix, then, is to bolster those vulnerable spots for improved mobility so they don’t feel unsafe and at-risk to begin with. Releasing, stretching, and activating is the best way to do it. “Mentally, the combo is like an active meditation and physically, it helps the body prepare for and recover from your workouts,” Fournier says.

Self myofascial release (SMR), the first in this three-step approach, primes your muscles to move through their full range by increasing the fluids in the tissues. It also decreases neural tone in the body. “After SMR, you’ve basically changed the conversation between brain and muscles by relaxing the tissues and making them feel momentarily safer,” Fournier says.

When your nervous system lets down its guard like that, it’s the perfect time to stretch. “These two passive modalities result in temporary change,” Fournier says. “You need to follow them up with activation through banded exercises to lock in those changes for more mobility and strength over time.”

The three routines below focus on the key muscles as well as secondary ones. They work well as a structured warm-up, since the strengthening element puts your body in fight-or-flight mode. “You can do the release-stretch combos on their own as a cool-down, as recovery on off days, or as part of your nightly regimen because they put you in rest-and-digest mode,” he notes.

Because they're low-intensity and low-impact, you can perform the sequences daily. Incorporate them on days you’re training the indicated muscles for the biggest benefits.

Sit on the floor with hands resting behind you, left leg bent with the foot flat on the floor, and right ankle resting on left knee. Place a foam roller or ball underneath the right glute in the pocket near the hip and roll for 30 to 60 seconds per side (in 7- to 10-second bouts).

Start on all fours, then bring the right leg forward, placing the knee on the floor behind your right wrist and the ankle in front of the left knee. Slide the left leg straight back, lower your hips to the floor, and rest your chest on your knee and forehead on a block on the floor in front of your. This stretches the same glute area that you just rolled. Hold for 2 minutes per side, either in 2 sets of 1 minute each or 4 sets of 30 seconds each.

Lie on your side with a mini band above the knees, legs bent (feet behind you), hips on floor, and upper body resting on your forearm. Simultaneously raise your hips and lift the top knee away from the bottom knee, creating tension in the band. “The top glute has to fight the resistance while the bottom glute keeps you off the floor,” Fournier says. Lower to return to start for one rep. Complete 1 to 2 sets of 6 to 8 reps per side, alternating sides every set.

Do it before: running, single-leg work (such as lunges or RDLs), and heavy bilateral lifts such as loaded squats, deadlifts, and hip thrusts

Lie on your stomach with a ball under your hip flexor, where the crease appears when you raise your knee. Put as much pressure as you can into the hip, rolling for 30 to 60 seconds per side (in 7- to 10-second bouts).

Start in a half-kneeling position with a bench behind you and rest the back foot on the bench. Rock forward to create a stretch in the quad and hip of the back leg. This takes the hips, which you just rolled, through their full range of motion, Fournier says. Hold for 2 minutes per side, either in 2 sets of 1 minute each or 4 sets of 30 seconds each.

Stand with feet at hip width and a mini band around the midsoles of your feet. Pull one knee up as high as you can, keeping the foot flexed, hold for 1 second at the top, then return to start and repeat on the other side for one rep. Do 1 to 2 sets of 6 to 8 reps.

Do it before: running and single-leg work

Lie on your back with arms overhead and a ball under your back, just behind the armpit. Or, stand against a wall with the ball in the same spot. “This area is always crazy tight because nothing moves around there, which prevents people from being able to easily lift their arms overhead,” Fournier says. Roll the area for 30 to 60 seconds per side (in 7- to 10-second bouts).

Stand with an anchor point, such as a squat rack or pole, to the right of your body. Cross the left arm in front of you, with thumb pointing down, and grab the anchor point with your left hand. “You should feel the stretch in the back of the shoulder where you just rolled,” Fournier says. Hold for 2 minutes per side, either in 2 sets of 1 minute each or 4 sets of 30 seconds each.

Stand with elbows bent at 90 degrees, palm facing each other, forearms parallel to the ground, and a light mini band around the wrists. Pin the elbows into the ribs, pull the wrists apart to create more tension in the band, and slowly shift the hands forward as if you were reaching out for something in front of you, then return to start for one rep. Do 1 to 2 sets of 6 to 8 reps, releasing the tension and resetting between each rep.

Do it before: upper-body training, overhead exercises, and pulls such as rows, pull-ups, or deadlifts

“When weak, muscles put up a guard to protect against injury, making them feel tight.” 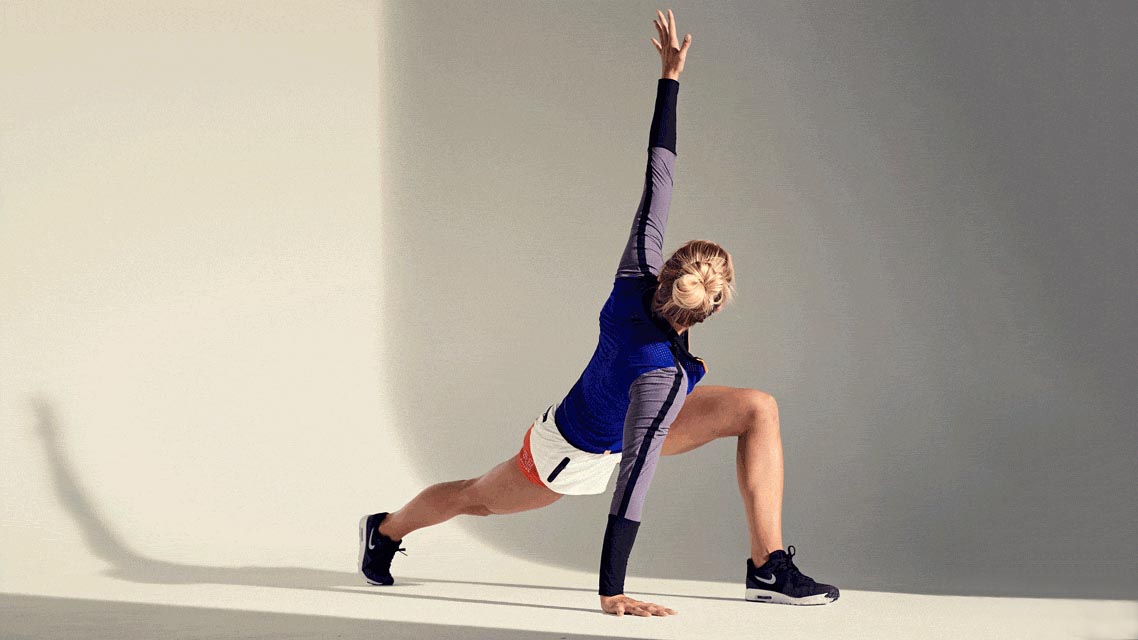 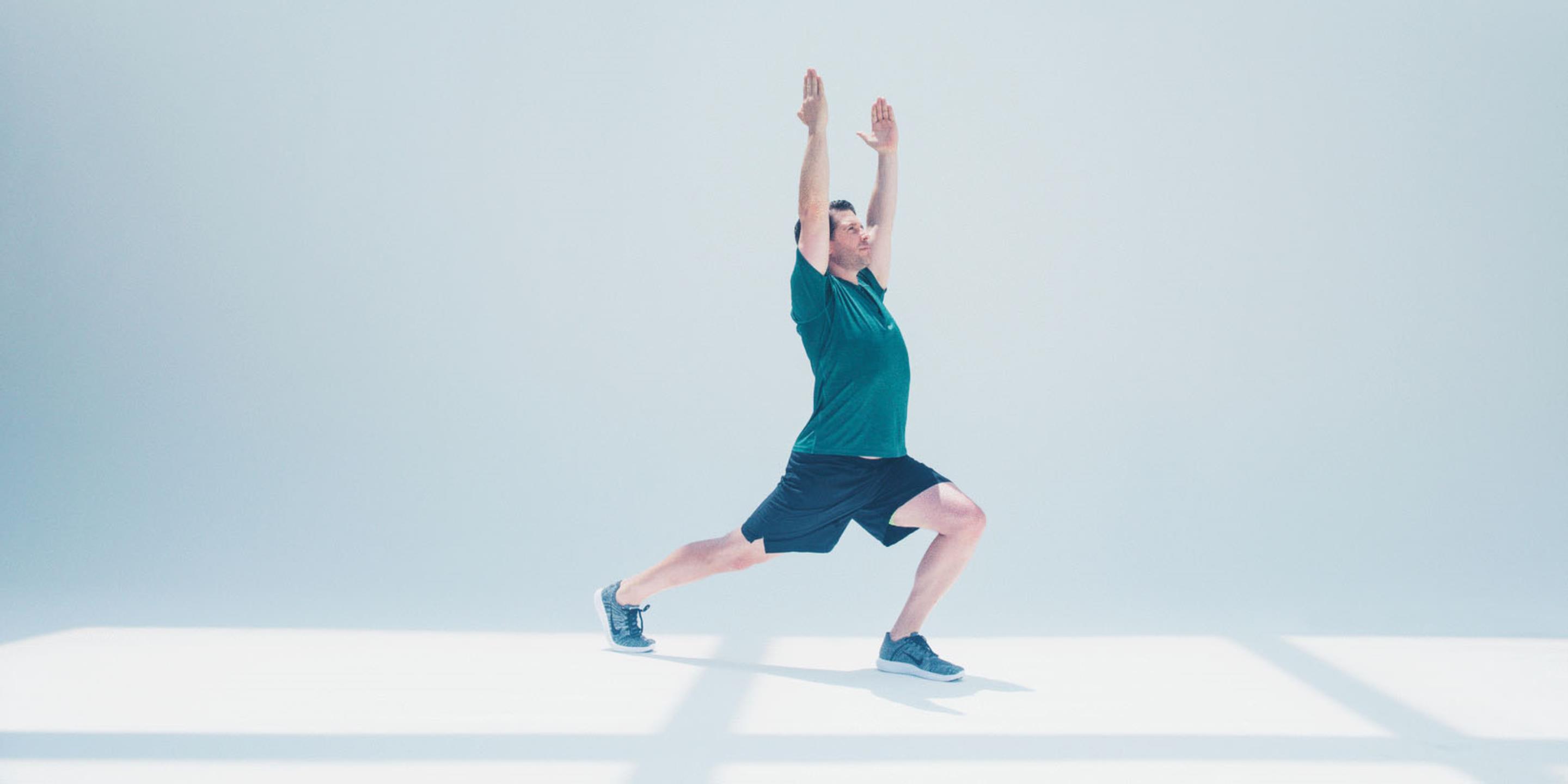